A US $1M project, with two phases. First phase: Establishment of Internet-connected computer centers in 15 remote public schools to date across the Philippines delivering Information and Communications Technology (ICT) access, connectivity, training and educational resources to students and public high school teachers and administrators in underserved areas. Second phase: development of courseware in science, math and civics for use in web or computer-based instructions. 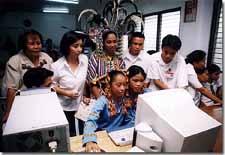 In the Philippines, Coca-Cola is helping to bring a new world of learning to rural students and teachers by connecting them to Internet-based educational resources.

Philippine President Gloria Macapagal-Arroyo has repeatedly stressed the importance of ICT for the future of the Philippines and as a powerful weapon in the fight against poverty. Coca-Cola has partnered with a Philippines NGO, the Foundation for Information Technology Education and Development (FIT-ED), in support of this national developmental priority.

Through a comprehensive training package for teachers, schools, technical staff and students, the ed.venture program is equipping schools and local communities with the knowledge and skills that will allow them to leverage ICT to enrich the teaching and learning process. The program has so far benefited over 15,000 students (aged between 13 and 17) and 630 public high school teachers and administrators.

Connectivity, training and telecollaboration components of the Coca-Cola ed.venture project are rolled out in full partnership with local communities, local school boards and the Philippine Department of Education, helping to ensure the sustainability and efficacy of the program. Learnings from this pilot project will inform national policy formulation on ICT for development.

For its second phase, the Coca-Cola ed.venture project branches out into the development of courseware in science, math and civics, for use in public schools with ICT equipment. This second phase - called "e-Curricula" - is an outgrowth of the learnings from the first phase of the program, and will serve to benefit the whole public school system when completed in 2008.