Nationwide program to instill cultural awareness and develop young leaders who are proud to be Thai and to represent their country. 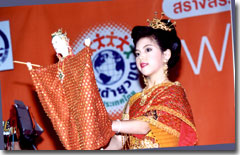 The gradual loss of Thai language and traditional culture in Thai youth as a result of the modern world's growing influence has been a major concern for His Majesty King Bhumipol Adulyadej and the Thai national government.

To date, over 140,000 students and teachers and 7,000 schools have taken part in the program's activities. These activities, including nationwide camps and competitions, seek to instill pride in Thailand's future leaders and develop cultural knowledge, ranging from national history to traditional dance, music and songs, and even to regional dishes and dialects. The program also strikes a balance between tradition/heritage and the future with the inclusion of other national educational priorities such as training in Information and Communications Technology.

There are currently over 150 Fanta Young Ambassadors, who also serve as honorary youth ambassadors for Thailand, receiving academic scholarships and the opportunity to participate in international crosscultural exchanges. These selected students also enjoy the exceptional honor of being recognized by HRH Princess Sirindhorn, a patron of youth development and educational reform. But whether they are selected as ambassadors or not, everyone who has participated in the program has taken something away from the experience.