Provides youth with educational opportunities and support systems. The program is developing public libraries in Indonesia into active community learning centers that disseminate information on a range of relevant issues. 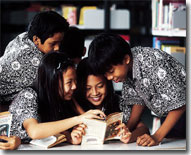 The non-profit Coca-Cola Foundation Indonesia (CCFI) was established in 2000 and aims to support the social welfare of Indonesian communities by focusing on a few long-term programs where it can make the biggest difference.

Education is a key priority for the Indonesian government, and to support national efforts to promote literacy and learning, CCFI is collaborating with PAKTA, a local NGO specializing in capacity-building activities, to turn basic public libraries into centers of active learning for local communities.

Launched in 2000, this nationwide Learning Center project includes provision of much-needed reading materials, library manuals, facilities and technical assistance, as well as training programs for library staff. Indonesia's former Minister of Education, Mr. Fuad Hassan, sits on CCFI's Board of Management and advises on the project and planning, while PAKTA provides technical assistance on program implementation and ensures that the libraries can function as sustainable learning centers.

To date, 19 Learning Centers have been set up throughout Indonesia in urban areas such as South Jakarta and rural areas such as Pundungsari Village. The Learning Centers have now evolved into hubs for disseminating information and promoting community awareness on such critical issues as environmental protection and HIV/AIDS. In an effort to help bridge the digital divide, the Centers are also now being outfitted with Internet access and computer resources.

Through an employee volunteer program, Coca-Cola employees also contribute their time and abilities to the program, including helping to train the staff and visitors at the Learning Centers on computer skills.