To help improve the overall nutritional health of children in rural areas of Vietnam, the Abbott Fund is working with AmeriCares to support the Giao Diem Humanitarian Foundation Pediatric Nutrition Program.

Despite unprecedented economic growth in Vietnam's prospering urban centers, malnutrition rates continue to rise in rural communities. The World Health Organization (WHO) estimates that children under five years old living in rural areas of the country are more than twice as likely to die as those who live in cities.

To help improve the overall nutritional health of children in rural areas of Vietnam, the Abbott Fund is working with AmeriCares to support the Giao Diem Humanitarian Foundation Pediatric Nutrition Program.

Together, the Abbott Fund and its partners are improving the nutritional status of pre-school and kindergarten-age children in three rural provinces of Vietnam – Quang Tri, Hue and Dong Thap – where childhood malnutrition rates were among the highest in the country.

The majority of participating children (98 percent) live in the Hue and Quang Tri provinces in Vietnam's Central Highland region, where mountainous terrain and limited arable land result in lower agricultural yields than in the northern and southern regions. This region is also extremely vulnerable to the impact of natural disasters, which has a detrimental effect on livelihoods, health status, food security and infrastructure.

This successful initiative targets nutritional health early in life. Administered through a network of local schools, the program has three main components:

The Abbott Fund has provided grants totaling more than $400,000, helping support the program's reach to 66 schools and more than 2,400 children.

In 2008, the Dong Thap province exceeded the national target, reducing its rate of malnutrition for children under five by over a quarter from 42 percent to 19 percent. 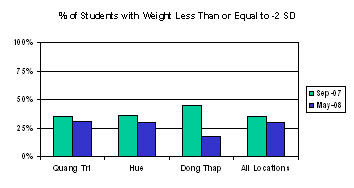 In addition to improving the health and nutrition outcomes for enrolled children, Abbott's support of the program contributes to Vietnam's national efforts to meet the United Nations Millennium Development Goals.

The Giao Diem program serves as a best-in-class, sustainable model for improving pediatric nutrition in rural Vietnam. Recently, neighboring communities have requested assistance in replicating the program, leading to the development and distribution of "start-up kits" to local NGOs.

Abbott Laboratories is a global, broad-based health care company devoted to discovering new medicines, new technologies and new ways to manage health. Abbott's products span the continuum of care, from nutritional products and laboratory diagnostics through medical devices and pharmaceutical therapies. Abbott's comprehensive line of products encircles life itself - addressing important health needs from infancy to the golden years. Abbott has sales, manufacturing, research and development, and distribution facilities around the world. Abbott is recognized for its global reach and ability to serve customers around the world.