War on Worms in Western Visaya

Integrated school-based Soil Transmitted Helminthlasis (STH) or intestinal worm infection control program. A collaborative effort between J&J, the University of the Philippines in Manila, the Department of Health, the Department of Education and the Local Government Units. 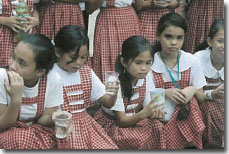 Johnson & Johnson Philippines' entry to the 2008 Asian Corporate Citizenship Awards, the integrated school-based soil-transmitted helminth (STH) control program dubbed as War on Worms in Western Visayas (WOW-V), was awarded as Winner in the Concern for Health category and Runner-up (Excellence Award) in the Support and Improvement of Education category during the awarding Ceremonies held at the Grand Copthorne Waterfront Hotel in Singapore last November 21, 2008.

Initiated in March and launched in October 2007, WOW-V is a collaborative effort between J&J, the University of the Philippines in Manila, the Department of Health, the Department of Education, and the Local Government Units. It is the first sub-regional effort of this type covering 3 provinces (Antique, Aklan and Capiz) and one city (Roxas City) in the Western Visayas region, potentially benefiting around 300,000 children. It aims to do a baseline survey of the prevalence of STH infection followed by the conduct of school-based mass drug administration (MDA) for all public school children twice a year for 2 years, with monitoring surveys in the middle and at the end of this period. The project is supported by a donation of 600,000 doses of Mebendazole 500 mg tablets per year for 2 years by J&J and funding from the J&J Asia Pacific Contributions Committee, J&J Philippines Contribution Committee, and resources from the counterpart organizations. The program is accompanied by advocacy meetings to encourage the local governments to commit to provide drugs for its sustenance beyond 2 years and address the sanitary concerns that are associated with STH. In 2 years, it hopes to reduce cumulative prevalence of STH by 50%, reduce prevalence of heavy infection to near 0%, as well as reduce malnutrition rate, reduce absenteeism, and improve academic performance of the public school children.

The award announcement from the Organizers, Partners and Intel (sponsor of the Asian Corporate Citizenship Awards) described the selection of awardees as follows:

"With 170 entries from 120 companies in 15 countries vying for the Awards, the judges had a very difficult time evaluating the excellent entries. Many of the entries, like yours, were impressive. In the end, the judges made some difficult decisions. Being selected as a winner is recognition that your entry was among the best in Concern for Health and Support and Improvement of Education categories in the region."

Johnson & Johnson, through its operating companies is the world's most comprehensive and broadly based manufacturer of health care products as well as a provider of related services, for the consumer, pharmaceutical, and medical devices and diagnostics markets. There are more than 250 Johnson & Johnson operating companies who employ approximately 121,000 men and women in 57 countries and sell products throughout the world. The Company's international expansion began in 1919 with the establishment of an affiliate company in Canada. The Johnson & Johnson headquarters is located in New Brunswick, New Jersey, USA.

The company has been consistently recognized by respected institutions for its corporate reputation, financial stability, performance, and work policies and environment. Among others, it has been named as Fortune's most admired pharmaceutical company in 2006 and ranked 6th across all industries. It ranks number 35 in the 2007 Fortune 500 list. In 2007, worldwide sales reached US$61.1 billion.

Johnson & Johnson offices are established in Singapore, Malaysia, Indonesia, the Philippines and Thailand, as well as a representative office in Vietnam. J&J consumer products are recognized as the leading baby care consumer goods provider, helping Asian Mothers with their babies' personal care needs. Our pharmaceutical products and medical devices have become trusted brands by healthcare professionals around the region.