(Singapore) - The East-West Center (EWC), the US-ASEAN Business Council and the ISEAS - Yusof Ishak Institute launched the 4th edition of the ASEAN Matters for America/America Matters for ASEAN publication today in Singapore to follow the Washington, D.C. release of the publication. The publication can be accessed here. The Singapore launch event also highlighted the 51 additional ASEAN Matters one-page information fact sheets detailing ASEAN’s relationship to each American state and the District of Columbia.

The ASEAN Matters publication is part of the EWC’s Asia Matters for America initiative. It aims to showcase increasing ties between the United States and the Association of Southeast Asian Nations (ASEAN). The publication features graphics, data, and analysis of a range of information on the U.S.-ASEAN relationship, including the strategic partnership, trade, investment, jobs, travel and tourism, educational exchanges, ASEAN American population information, and sister city partnerships. It also highlights the economic and commercial potential of the region through statistics on economic and demographic growth, expanding infrastructure needs, and the rise of a digital economy.

The 10 member states of ASEAN formed the ASEAN Economic Community in 2015. Collectively, ASEAN has the 3rd largest population in the world, the 5th largest GDP, and is the 4th largest export market for the United States. Over half a million U.S. jobs are supported by exports to ASEAN. Tourists from ASEAN number over 4 million in a year and contribute $5 billion to the U.S. economy annually. An additional 60,000 students from the region contribute over $2 billion a year to the U.S. economy. ASEAN’s middle class is set to double to 334 million by 2030. The region is also the world’s fastest-growing internet market with a digital economy to exceed $240 billion by 2025.

“We are pleased to be able to launch the latest ASEAN Matters for publication and 1-pagers at ISEAS and with USABC—our partners on this important initiative—including a panel discussion on the current state of U.S.-Southeast Asian relations,” said Dr. Satu Limaye, Vice President and Director of the East-West Center in Washington. “We are grateful for ISEAS’ and USABC’s support and substantive cooperation in making this the premier report on expanding U.S.-Southeast Asian relations at the national, state and local levels.”

“We are in the midst of the fourth industrial revolution disrupting businesses and processes, as countries and cities across ASEAN define their own ‘Industry 4.0’ agendas, and of course, there are always shifting political and economic uncertainties in the increasingly intertwined world we live in,” said Ambassador Michael W. Michalak, Senior Vice President and Regional Managing Director of the US-ASEAN Business Council. “Still, amidst these challenges ASEAN has proven to be one of the more resilient regions in the global economy and is still one of the world’s most remarkable opportunities for growth, and that’s what we hope to convey in this publication.”

“The publication ASEAN Matters to America, America Matters to ASEAN plays a valuable role by providing relevant and up-to-date hard data on US-Southeast Asia connections to Southeast Asians and to all who matter in the US – the busy Congressman, overworked official, sleepless scholar and harried journalist – and it does so in a compact and attractive way. We in ISEAS are happy to facilitate the Singapore launch and do so in the hope that it will not only make both sides realise how much we matter to each other, but also play a small part in bringing the two sides even closer together,” said Choi ShingKwok,  Director of the ISEAS-Yusof Ishak Institute.

The Washington D.C. launch event was held on July 23 and was attended by U.S. policymakers and government officials, representatives from the ASEAN diplomatic missions, press, academia, entrepreneurs, and more. The event featured remarks from Dr. Satu Limaye, Vice President and Director of the East-West Center, Representative Ann Wagner (R-MO), House Foreign Affairs Committee and Co-Chair of the Congressional Caucus on ASEAN, US-ABC President and CEO, Alexander Feldman, Representative Ted Yoho (R-FL), Member of the House Foreign Affairs Committee, Ranking Member of the Subcommittee on Asia and the Pacific, His Excellency Mahendra Siregar, Ambassador of the Republic of Indonesia to the United States of America, and Astri Kimball Van Dyke, Senior Counsel at Google, a platinum-level sponsor of the publication.

About the Asia Matters for America Initiative
The East-West Center’s Asia Matters for America initiative, maps the trade, investment, employment, business, diplomacy, security, education, tourism, and people-to-people connections between the United States and the Indo-Pacific at the national, state, and local levels. The website, publications, and one-page summaries for states and congressional districts are resources for understanding the robust and dynamic US-Indo-Pacific relationship. The initiative was created in 2008 and has produced 16 publications, thousands of one-page connections summaries for U.S. states and congressional districts, and over 150 data visualizations on the initiative’s website: AsiaMattersforAmerica.org.

About the US-ASEAN Business Council
For 35 years, the US-ASEAN Business Council has been the premier advocacy organization for U.S. corporations operating within the dynamic Association of Southeast Asian Nations (ASEAN). Worldwide, the Council's membership of more than 160 companies generates over US$6 trillion in revenue and employs more than 13 million people globally. Members include the largest U.S. companies conducting business in ASEAN, and range from newcomers to the region to companies that have been working in Southeast Asia for more than 100 years. The Council has offices in Washington, DC; New York, NY; Bangkok, Thailand; Hanoi, Vietnam; Jakarta, Indonesia; Kuala Lumpur, Malaysia; Manila, Philippines; and Singapore

About the East-West Center
The East-West Center promotes better relations and understanding among the people and nations of the United States, Asia, and the Pacific through cooperative study, research, and dialogue. Established by the U.S. Congress in 1960, the Center serves as a resource for information and analysis on critical issues of common concern, bringing people together to exchange views, build expertise, and develop policy options. The Center is an independent, public, nonprofit organization with funding from the U.S. government, and additional support provided by private agencies, individuals, foundations, corporations, and governments in the region. The Center’s Washington, D.C. office focuses on preparing the United States for an era of growing Indo-Pacific prominence.

About the ISEAS - Yusof Ishak Institute
The ISEAS - Yusof Ishak Institute (ISEAS) is an autonomous organization established in 1968. It is a regional centre dedicated to the study of socio-political, security, and economic trends and developments in Southeast Asia and its wider geostrategic and economic environment. The Institute’s research programmes are grouped under Regional Economic Studies (RES), Regional Strategic and Political Studies (RSPS), and Regional Social and Cultural Studies (RSCS). The Institute is also home to the ASEAN Studies Centre (ASC), the Temasek History Research Centre and the Singapore APEC Study Centre. 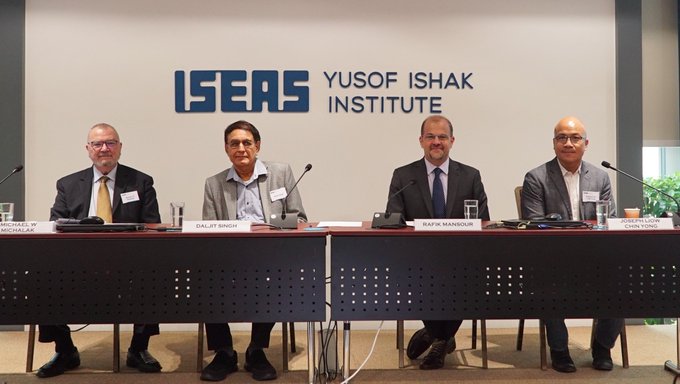