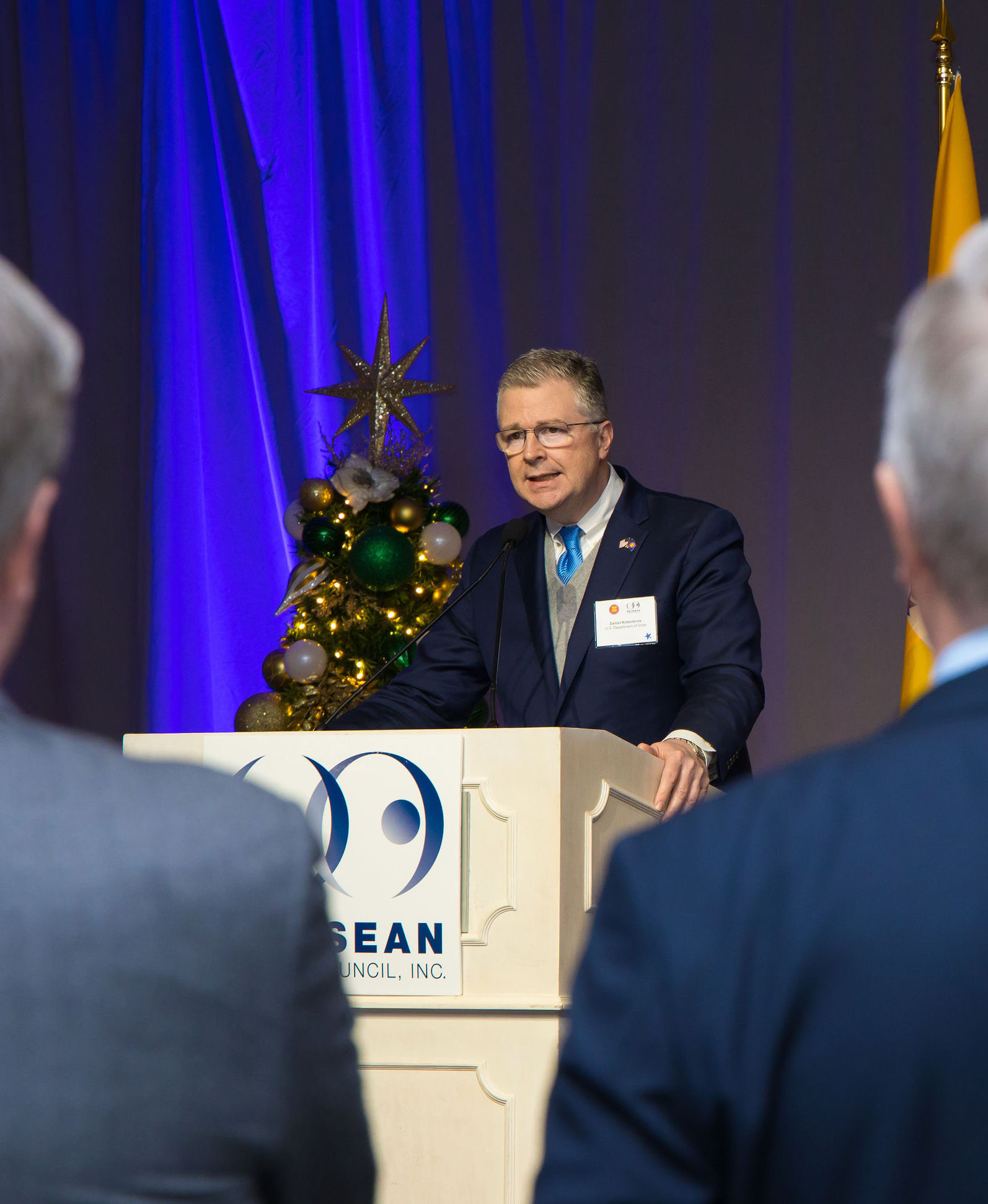 (Washington, D.C.) The US-ASEAN Business Council (USABC) celebrated the 45th anniversary of U.S.-ASEAN relations today with a gala reception in Washington, D.C. The gala featured a keynote speech by U.S. Assistant Secretary of State for East Asian and Pacific Affairs Daniel J. Kritenbrink, who spoke about U.S. priorities towards and strategic interests in the Indo-Pacific. H.E. Nguyen Quoc Dzung, Ambassador of Vietnam to the United States, and Mr. Craig S. Smith, Chairman of the USABC Board of Directors and Group President & Managing Director of International Operations for Marriott International, offered remarks.

“The Biden-Harris administration has made it clear that U.S. foreign policy is grounded in our relationships with our allies, partners and friends,” said Assistant Secretary Kritenbrink. “Through a shared vision of maintaining a free and open Indo-Pacific region, I am confident that the United States and ASEAN will be committed to strengthening close engagements, as we work to take on a range of important challenges.”

“For the road ahead, ASEAN is keen to continue close collaboration with the U.S. in rolling out the new comprehensive strategic partnership; in sustaining the ASEAN Centrality and promoting the ASEAN Indo-Pacific Outlook,” said Ambassador Dzung.  “To that end, the ACW will continue working closely with American partners to drive the comprehensive strategic partnership forward in all areas.”

“Southeast Asia has reopened its borders with positive economic indicators and manufacturing activities reviving all over the region,” said USABC Chair Craig S. Smith. “The continuation of this early progress will require the entire ecosystem – from transportation, tourism, manufacturing and the government – working together to create safer, greener and stronger economic growth.”

This has been a significant year for U.S. relations with Southeast Asia. From the U.S.-ASEAN Special Summit in May to the elevation of the relationship to a comprehensive strategic partnership in November, to the initiation of the Indo-Pacific Economic Framework (IPEF), which includes seven ASEAN countries that are all participating in all four of the pillars, demonstrate a positive trajectory ahead.

“It is an honor for the Council to continue to play a role in promoting U.S.-ASEAN relations and helping American companies expand their business and investment in Southeast Asia,” said Ambassador Ted Osius, President & CEO of the US-ASEAN Business Council.  “We look forward to supporting the IPEF negotiations and our shared priorities in digital economy, better health infrastructure, and sustainable economic recovery during the U.S. APEC host year.”

Since 1984, the US-ASEAN Business Council has been the premier advocacy organization for U.S. corporations operating within the dynamic Association of Southeast Asian Nations (ASEAN). Worldwide, the Council's membership of nearly 170 companies generates almost US$7 trillion in revenue and employs more than 14.5 million people.  Today our members include the largest U.S. companies conducting business in ASEAN and range from newcomers to the region to companies that have been working in Southeast Asia for more than 100 years. The Council has nine offices around the globe, in Washington, DC; New York, NY; Bangkok, Thailand; Hanoi, Vietnam; Jakarta, Indonesia; Kuala Lumpur, Malaysia; Manila, Philippines; Singapore; and Yangon, Myanmar.