About CPTPP and RCEP

What is the Comprehensive and Progressive Agreement for Trans-Pacific Partnership (CPTPP)?

After President Donald Trump withdrew the United States from the original Trans-Pacific Partnership (TPP) in January 2017, the remaining 11 signatories, known as the TPP-11, successfully developed a new trade agreement without the U.S.: the CPTPP. The CPTPP was signed in Chile in March 2018 and entered into force on December 30, 2018. Members of the CPTPP cover a combined 13.5% of the global economy, making this one of the largest free trade agreements in the world.

Most provisions of the CPTPP are similar or identical to the original TPP. However, 22 provisions of the TPP that were once favored by the U.S. but generally opposed by other signatories were suspended in the CPTPP. One of the main differences in the CPTPP is the removal of certain provisions regarding intellectual property. Though the U.S. favored longer copyright terms, automatic patent extensions, and separate protections for new technologies, these provisions were unpopular among the remaining signatories and ultimately removed from the CPTPP. The CPTPP also features modifications to the investment chapter, certain implementation timelines, and labor and environmental rules from the original TPP. These suspended provisions, however, can also be reinstated, leaving the door open for the U.S. to join the agreement.

The withdrawal of the U.S. did indeed have a considerable impact on the effects of the trade agreement, reducing the global income gains from the agreement by 70%. Yet, even without the U.S., the CPTPP still creates real income gains of approximately 1% of GDP for CPTPP countries. The Peterson Institute for International Economics estimates that the CPTPP will add an estimated $147 billion to global income. The CPTPP provides crucial trade and investment liberalization and reforms, boosting productivity and business opportunities in member countries.

Entry into Force and Status of Ratification

Once signed in March 2018, the CPTPP needed six participating countries to ratify the agreement to bring it into effect. As of May 2019, seven countries have ratified the CPTPP: Australia, Canada, Japan, Mexico, New Zealand, Singapore, and Vietnam. The agreement entered into force between these seven countries on December 30, 2018 but has yet to enter into force for the remaining four signatories – Brunei, Chile, Peru, and Malaysia – that have not yet ratified the agreement.

The Future of the CPTPP in ASEAN

The CPTPP is open to accession by other countries, including the U.S. and other Southeast Asian nations, though the process may be lengthy due to the high standards included in the agreement. Beyond the existing signatories of the CPTPP in ASEAN, Thailand, Indonesia, and the Philippines have expressed interest in joining the CPTPP. Adding more economies to the CPTPP could multiply the benefits of the agreement. According to the Peterson Institute for International Economics, if Indonesia, Korea, Philippines, Taiwan, and Thailand entered the CPTPP, the benefits would increase three-fold. The addition of these five countries to the agreement would yield an estimated $449 billion per year in global income gains, in comparison to the $147 billion annual benefits generated by the current agreement. Increasing CPTPP membership would spur greater regional economic integration and supply chains across the Asia-Pacific region.

The Regional Comprehensive Economic Partnership (RCEP) is another proposed free trade agreement involving many of the same countries as the CPTPP. 16 countries have been negotiating the RCEP with the goal of broadening and deepening trade ties in the Asia-Pacific region. All 10 ASEAN countries – Brunei, Cambodia, Indonesia, Laos, Malaysia, Myanmar, the Philippines, Singapore, Thailand, and Vietnam – are involved in the negotiations, along with six ASEAN free trade partners in the region: Australia, China, India, Japan, South Korea, and New Zealand. The countries comprising the RCEP account for approximately 30% of global GDP and have a collective population of over three billion people, which would make the RCEP the largest FTA in the world. Objectives and guiding principles for negotiating the RCEP may be found here. RCEP negotiations were launched in late 2012 but have yet to conclude.

On November 12, 2018, economic ministers gathered during Singapore’s ASEAN Chairmanship to achieve a “substantial conclusion” of RCEP negotiations in time for the ASEAN leaders’ meeting. It appears that some flexibility was requested to delay conclusion in view of four elections in 2019 -India, Indonesia, Thailand, and the Philippines. The signing and ratification of free trade agreements could be politically difficult and challenging for governments. To date, only seven of the eighteen “chapters,” or major negotiation topics, have been agreed to: Economic and Technical Cooperation, Small and Medium Enterprises, Customs Procedures and Trade Facilitation, Government Procurement, Institutional Provisions, Sanitary and Phytosanitary Measures, and Standards, Technical Regulations and Conformity Assessment Procedures. A copy of the 2018 Joint Leaders Statement is available here.

The main difference between the RCEP and the TPP, however, is that the RCEP does not contain major commitments on labor, the environment, intellectual property, state-owned enterprises, and many other issues addressed in the original TPP and the CPTPP. For example, it remains to be seen whether the RCEP e-commerce chapter, expected to be concluded this year, will be any closer to CPTPP. 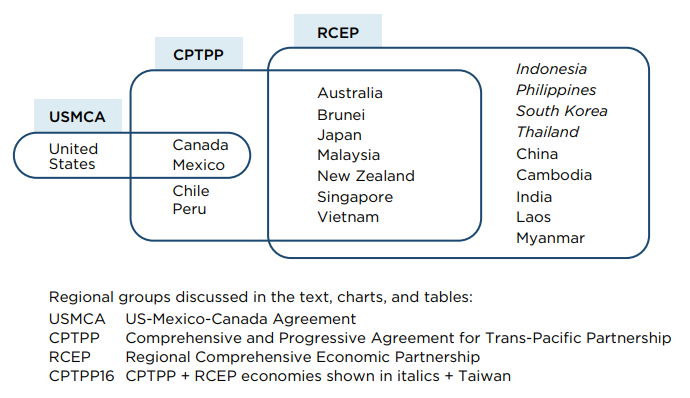