The US-ASEAN Business Council Institute, Inc. (USABCI), the US-ASEAN Business Council's 501(c)(3) tax-exempt arm, obtained a license from the United States Department of the Treasury's Office of Foreign Assets Control (OFAC) in 2007, when the US sanctions regime was in full force. The license allowed USABCI to raise and transmit funds for the maintenance and restoration of the Musmeah Yeshua Synagogue in Yangon, Myanmar.

This was and is an exciting project for the Council not only because it was the first OFAC approved license for providing assistance to a humanitarian project the Council received but also because the Council and its members and contributors witnessed the Myanmar past, present and future in  unanticipated, invaluable ways.

Yangon once had a thriving Jewish community consisting primarily of Jews from Iraq, Iran, Cochin and Calcutta. The Musmeah Yeshua Synagogue was built in 1893-96 in response to the growing Jewish population which, at its peak, numbered about 2500. The mayor of Rangoon (Yangon) in the 1930's was Jewish.  During World War II, and in the years following, most of the Jews in Burma migrated to other countries.

Now, with only a handful ( around 25) of Jewish people in the country, the synagogue was in desperate need of restoration. Without restoration and maintenance, the Council determined that this unique piece of Burmese history would be lost.  With the license, the Council sought to and did achieve the following goals:

On December 8, 2013 in Yangon, at an event attended by Myanmar Presidential Minister U Aung Min and US Ambassador Derek Mitchell and Israeli Ambassador Mr. Hagay Moshe Behar, the Yangon Religious Council, and other esteemed guests, USABCI President Frances A. Zwenig commemorated the successful completion of this CSR project. Sammy Samuels, the son of the synagogue's Trustee, Moses Samuels, confirmed that the synagogue was now financially self-sufficient and could stand on its own. 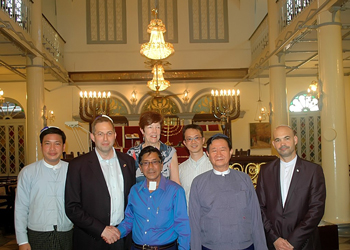 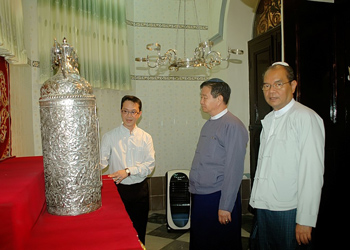 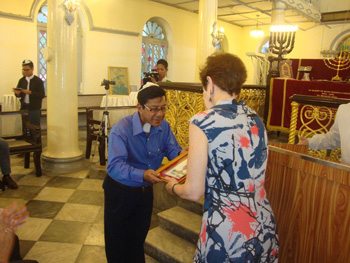 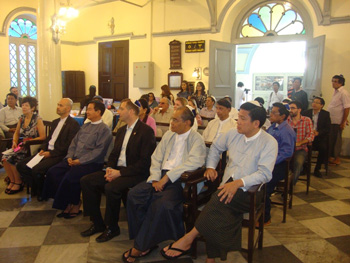 Voice of America: Burma Synagogue Preserved as Symbol of Multi-Religious Past

The success of this project is due to the efforts past and present of three people: Ruth Cernea, Laura Hudson, and Stuart Spencer.

Ruth Cernea was the author of Almost Englishmen: Baghdadi Jews in British Burma, which chronicles the history of the Jewish community in Rangoon. She was present at the creation of our efforts to help the synagogue. We regret that she is not here today to experience our success. 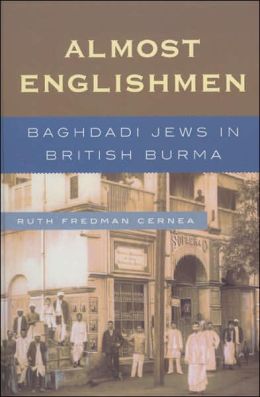 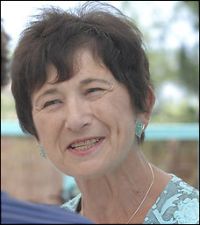 The late Laura Hudson is one of the three from the Council who first visited the synagogue in October 2006 and who helped conceive this CSR undertaking. She has guided the project all along and contributed time, money and inspiration. Some sample images of the restoration work in progress: 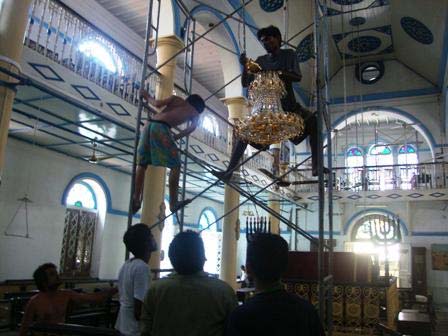 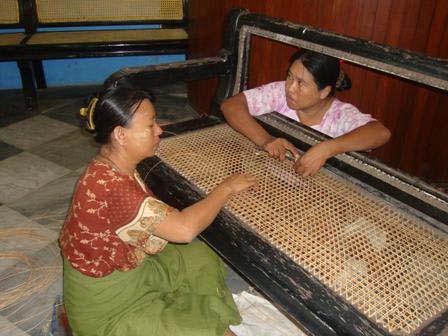 Stuart Spencer is a member of the synagogue's diaspora. He first came back with his cousins in February 2009 and has returned at least once a year ever since. Stuart made possible the construction of the new cemetery site and helped guide Moses and Sammy Samuels in the restoration of the synagogue. 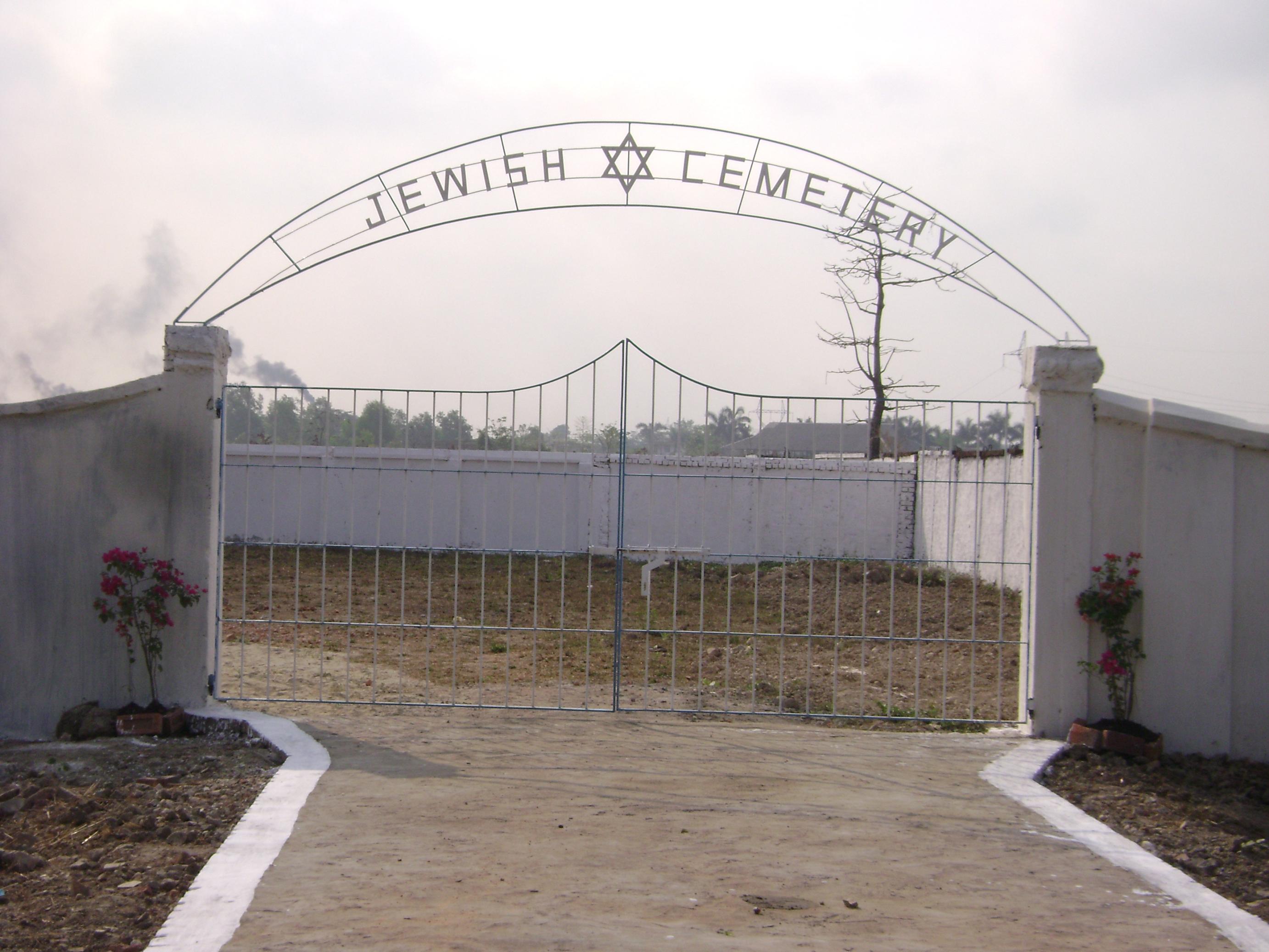 What the Synagogue Means Today


Ambassador of Israel Mr. Hagay Moshe Behar observed at an interfaith meeting on December 8th, 2013 at the synagogue “the warm and friendly relations that exist between the Jewish Community and all the religious communities in Myanmar”. Present at the meeting were Muslim, Christian, Bahai, Hindu and Buddhist leaders

Walking down Mahabandoola Street, one of the main thoroughfares of downtown Yangon, right at about 26th Street, if you look carefully, you may notice a little, blue Star of David painted above a row of ordinary looking shops. It’s on the side of Burma’s beautiful, old, Sephardic synagogue. 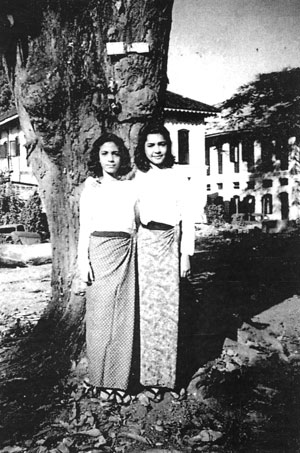 REMARKS FROM DIANE COHEN AT THE U.S. CONSULATE
February 2009

It is so nice to be back…

My great grand parents came to Burma in the 1850's from Baghdad. They were diamond merchants, the rest of the Jewish people came there in the late 19th century as British citizens. They flourished establishing businesses, built the Musmeah Yeshuah synagogue and the Jewish school.

Dad owned the Broadway hotel on Sule Pagoda road where British soldiers played billiards.  The paradise ballroom would have entertainers from London.

When Japan occupied Burma, we were fortunate to leave for Calcutta on the last boat. My family returned after the war was over. Dad had a dry goods store near the synagogue. I went to a protestant school (diocesan girl's school) and then to St. john's convent and while walking to school (being late after having a rabies shot) I heard shots from the secretariat building and found out later that Bogoke Aung San was assassinated together with 4 diplomats and 4 other dignitaries.

I still miss the smells of the Burmese cooking at 4'oclock in the morning. Wonderful people.

The 13th Blue plaque was unveiled at the Synagogue in downtown Yangon Sunday and the Jewish community also glad on preservation of this heritage trust.

The Yangon Heritage Trust installed the Blue Plaque at the Musmeah Yeshua Synagogue in the city that is the only remaining Jewish house of worship in Myanmar.

The synagogue was established in 1852 and but this building was rebuilt again in 1896 after the fire engulfed the previous wooden building, according to the history.

The family preserves the synagogue and they believe that the building can attract more tourists in future by installing the blue plaque. They also said, it is a kind of proof that different religions have lived peacefully in Myanmar since several decades ago.

SAMUEL FAMILY MEMBER, SAMMY SAMUEL: Ancient buildings can tell the story and this is a good proof that different kinds of religions have lived together peacefully in the country for a long time. I believe we can keep this situation in future.

The synagogue also listed on the top 10 lists of tourist destination sites of Yangon, according to the “tripadviser” website.

If you are interested in visiting the synagogue, please visit Myanmar Shalom Travels. 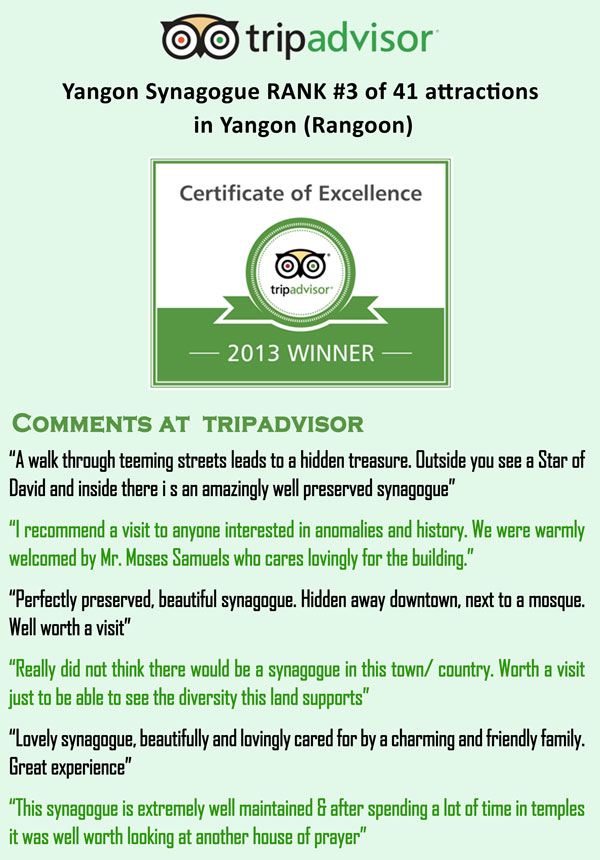